Dakpo Dawö Shunu was the first of the Gampo Tulku lineage. He was one of the most prominent masters of Kagyu School of his time. The second was the Dakpo Kunkhyen Tashi Namgyal who was known to be the reincarnation of Orgyen Bima Dakpo Lhajey.

Gyenchok Sangpo Dorje was the fourth lineage holder of Gampo Tulku. It is believe that he had discovered some terma teaching. Beginning with him, Gampo Institute started to practice both Kagyu and Nyingma traditions. Hence the tradition is known as Ka-nying, which means the union of Kagyu and Nyingma.

The fifth was Kunsang Ngedon Wangpo and the sixth Gampo Dodul Lingpa. The latter was the chief of the three revealers of the hidden land of Pemakö. As prophesied by Guru Rinpoche, Gampo Dodul Lingpa discovered the holy place of Pemakö and introduced the Dharma to the local tribes. He built the Palace of the Compendium of Vajrasattva and the Monastery of Tambu Rinchen Pung in the center of Pemakö so that the Dharma might remain there long. We have not witnessed any biography of the seventh or eighth Gampo Tulkus.

Gamtrul Shedrup Lungtok Yönten Gyatso was born in the north-west of the Lhasa in 1954. He went to exile in India when he was seven years old. There he began to learn reading and writing from his father. At the age of eight, he went to Kalimpong to receive the various empowerments and transmissions of Nyingma Kama from His Holiness Dudjom Rinpoche. After the empowerments, he was recognized as the incarnation of Gampo Tulku. He gradually started to do intensive literary studies with His Eminence Khochim Rinpoche. Eventually, he did academic studies of Buddhist philosophy under Khenchen Tsöndrü in Ngedon Gatsal Ling Monastery. At the same time, he was studying Tibetan grammar under Lama Gönpo Tenzin as well as ritual subjects such as recitation, making tormas, sand mandalas, and so on.

Afterwards, following the intention of his teachers and masters, he performed the duties of chant leader and then discipline master for quite a long time. While he was serving the monastery in that capacity, he would go whenever he got the time and opportunity to receive the ocean-like teachings of the Nyingma tradition from H.H. Dudjom Rinpoche, H.H. Dilgo Khyentse, H.H. Dodrup Rinpoche, H.H. Taklung Tsetrul Rinpoche, H.H. Nyoshul Khenpo and H.H. Dungsey Trinley Norbu.

Around the age of twenty-eight or nine, Dilgo Khyentse Rinpoche convinced him to take leave from the monastery and come to him. He followed his master’s advice and went to Dilgo Khyentse Rinpoche. While he was with Rinpoche, he served him by arranging texts, preparing empowerments, making tormas during drupchens, leading the chants, and so on. He was fortunate to receive almost all the teachings, empowerments, and transmissions of the Nyingma school from Rinpoche.

From Dilgo Khyentse Rinpoche’s parinirvana to the present time, he has been helping Rabjam Choktrul Rinpoche to edit the Jewel Treasury and other important texts. Currently he lives in Nepal at Shechen Tennyi Dargye Ling Monastery. 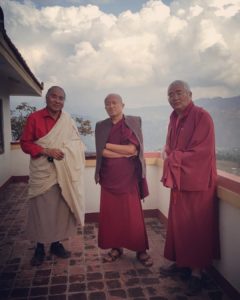 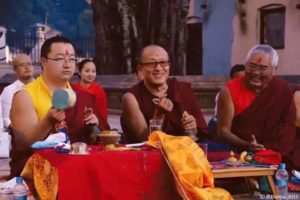