His Holiness the Fifth Gampopa Tulku, Orgyen Drondül Lingpa, the Dharma King of Pemakö (18th century), left Tibet and for what Guru Rinpoche indicated to him as the king of all the sacred hidden lands, Pemakö. Thus, as Guru Rinpoche prophesied, Gampopa Tulku opened the gate of Pemakö and established the Nyingma lineage there.

Afterwards, in a pure vision, Guru Rinpoche told Gampopa Tulku that he should marry a dakini, prophesying that he would have five sons whose bodhisattva achievements would exceed even their father’s and who would benefit limitless beings in the future.

In 1962, His Holiness Dudjom Rinpoche recognized Gyalse Tulku as the fourth Gyalse Dechen Lingpa of Pemakö.

In 1965, Gyalse Tulku Rinpoche and his brother, Gampopa Dakpo Tulku Rinpoche, were sent to Mindrölling Monastery in north India, where they studied Tibetan grammar, torma making, vajra dance, chanting, astrology, poetry, and Buddhist philosophy. Upon completion of his studies there, Gyalse Rinpoche went to Sikkim to follow the great Dzogchen Khenpo Tsundru for seven years and to pursue more advanced studies of the sutras and tantras.

From 1978 to 1988, Rinpoche served as the head khenpo of Mindrölling, teaching subjects ranging from grammar to the Tripitaka and tantric philosophy.

From childhood, Gyalse Tulku Rinpoche and his brother Gampopa Dakpo Tulku Rinpoche received all the new and old tantra transmissions from all the lineage holders of the older generation of Nyingmapa lamas.

From the Minling Trichen Rinpoche, he received the Minling Dorsam and the explanation and secret instruction of Guhyagarbha Mayajala Tantra.

From Trulshik Rinpoche, he received the complete termas of Dilgo Khyentse Rinpoche, Dam-ngak Dzö, and the root texts of Longchen Nyingthik.

Rinpoche is highly esteemed by all the high lamas of the four schools. Recently, in the long-life cave of Maratika in Nepal, Rinpoche completed a long-life retreat. Rinpoche’s wish is to maintain the pure Nyingma lineage for students from Pemakö and from around the world. Therefore, Rinpoche wishes to re-establish the Pemakö lineage and to reconstruct the monastery at the old location in Sikkim, which has been gifted by Dzongsar Kyentse Rinpoche.

Gyalsey Rinpoche at the Vajrakilaya Drupchen 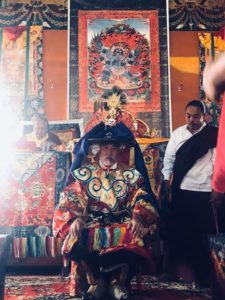 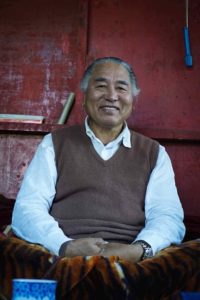