The title Minling Shabdrung designates the younger brothers of Minling Trichen. Minling Shabdrung Jampel Chödrak was born the younger brother of the 11th Minling Trichen. He was also nominated to the list of the 13th   Dalai Lama by Regent Radeng Rinpoche. His scholarship, practice, and strengths were incomparable, yet he passed away in prison due to the political situation in Tibet.

His reincarnation, Khentul Dorjee Bhum Rinpoche, was born to a noble family. As a child, his memory of his previous life was crystal clear. He used to say, “I am Jampel-la, and I have a huge monastery and many monks. My monks ignored me and I died of starvation.” Thus he was recognized as the reincarnation of late Minling Shabdrung Jampel Chödrak.

H.E. Dzongsar Jamyang Khyentse Rinpoche saw him and realized he was a great tulku, capable of benefiting all beings and spread the Buddha Dharma all across the world. Hence, Rinpoche gave him a letter of recognition, saying that he would benefit all sentient beings and maintain the Buddha Dharma in this degenerate age. Dzongsar Khyentse Rinpoche has also gifted him land on which Rinpoche himself had lived for many years in his youth and which is also a secret place of Guru Padmasambhava. The place is located in Sikkim and is known as Gyal Shing.

Khentul Dorjee Bhum Rinpoche began his studies at the elementary level at Mindrolling Monastery, where he studied all the major and minor texts of Buddhism in the shedra there. Eventually he completed the khenpo degree at Mindrolling Shedra. While he was studying there, he received many transmissions, such as the hundred and eight volumes of the Buddha’s teachings, the tantric teachings of Nyingma tradition, and many other Kama and Terma teachings and uncommon mind training instructions from Taklung Tsetrul Rinpoche, who is the embodiment of Vajradhara, Dzongsar Jamyang Khyentse Rinpoche, Yangthang Rinpoche, Trulshik Rinpoche, Lhodak Namnying Rinpoche, Pemakö Gyalse Rinpoche, Pemakö Gampo Daktrul Rinpoche, Ladakh Tokden Rinpoche, and many other masters.

Khentul Dorjee Bhum Rinpoche has also been practicing the teachings and mind trainings that he received from the aforementioned great masters. Rinpoche’s vision is to maintain the Buddha Dharma by creating good conditions for others to practice and meditate in this degenerate age, which is extremely crucial. To accomplish this formidable task requires excellent practitioners and meditators. Hence, Rinpoche is going to build a retreat center at Gyal Shing, which as mentioned has been given by Dzongsar Khyentse Rinpoche, where he will provide good facilities to the practitioners so that they may have an ideal place to do their own practice without difficulty. 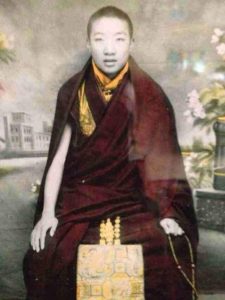