The great accomplished practitioner, H.E. Drubwang Konchok Norbu Rinpoche (1921-2007) was born in Drikung,Tibet in 1921. He entered Drikung Nyima Changra Buddhist Institute at a very young age and studied Buddhist philosophy. After his graduation, Drubwang Rinpoche became the disciple of one of the foremost contemporary retreat masters of the Drikung Kagyu lineage, Drubwang Pachung Rinpoche (1901-1988). Under the guidance of Drubwang Pachung Rinpoche, Drubwang Konchok Norbu Rinpoche went on retreat for many years and eventually gained the supreme experiential understanding of Mahamudra.

At the request of H.H. The 14th Dalai Lama, Drubwang Rinpoche traveled to different countries such as India, Nepal, Singapore, Malaysia, USA and Taiwan to propagate the practice of Avalokiteshvara’s six-syllable mantra. Through his deep compassion, he encouraged and inspired people to do the simplest of all dharma practices – extend kindness and recite the mantras of the three kayas: Om Ami Dewa Hrih (mantra of Amitabha), Om Mani Padme Hung (mantra of Avalokiteshvara), Om Ah Hung Benzra Guru Padma Siddhi Hung (mantra of Guru Rinpoche).

Drubwang Rinpoche initiated the first Singapore 100 Million Mani Recitation Retreat in 2001. Accumulation of the100 million Mani mantra was achieved. The retreat has since become an annual dharma event in Singapore.

On 25 December 2007, Drubwang Rinpoche passed into parinirvana in Singapore. Rinpoche was remembered for his genuine teachings and straight forward advices. His compassion and his effort in propagating the six-syllable mantra have served as a great inspiration to many. 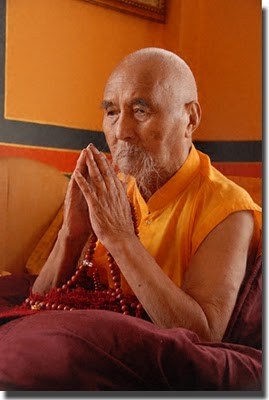 The current 7th Thritsab Rinpoche was born in India on 10 February 1981. Thritsab Rinpoche was recognized by H.H. Drikung Kyabgon Chetsang Rinpoche in 1986 and was officially enthroned on 14 January 1990. Thritsab Rinpoche completed all his monastic education in Drikung Kagyu Institute at Dehradun of India. Following the footsteps of the great masters of the past, he did his three-year retreat from 1996 to 1999 in order to undertake the task of benefitting all sentient beings. Rinpoche has also received many teachings, instructions, oral transmissions and empowerments from H.H. Drikung Kyabgon Chetsang Rinpoche, Kyabje Trulshik Rinpoche and H.H Kyabje Taklung Tsetrul Rinpoche of Nyingma lineage, H.E. Garchen Rinpoche, Most Venerable Togden Rinpoche, Most Venerable Khenchen Konchok Gyaltsen Rinpoche and many other great masters on various occasions.

Thritsab Rinpoche is currently the chairperson for the Drikung Kagyu Religious Society (DKRS) and the head of Rinchen Ling Monastery in Kathmandu, Nepal.

Rinpoche has traveled to Singapore, Taiwan and Malaysia. He has also been invited to USA, Sweden, Germany, Austria, Estonia and Latvia to give teachings and empowerments to Drikung Kagyu disciples.

Some of the teachings that Thritsab Rinpoche usually teaches are “Jewel Ornament of Liberation” and “The Bodhisattva Way of Life”. Rinpoche has also taught the practice of “Pure Vision of Achi Chokyi Drolma”, a hidden treasure retrieved by the previous Thritsab Gyabra Rinpoche.