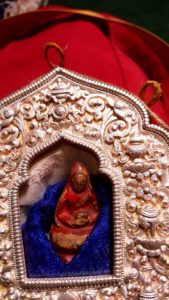 From the profound dharma of essence-bindu of Vidyadhara, Wondrous Mirror, the content of the two representatives of Guru Rinpoche

Homage to the three roots and entire gods.

I, prince Pedma Sambhawa, the tamer of beings,

Form the syllable of compassion, Hri, of Amitabha,

In the stainless bright island of ocean Sindhu,

On the lotus which consisted of thousand leaves piled upon another.

I manifested as the heir of the victorious one, the tamer of beings,

I was recognized as the son of the King Inda Bhodhi,

And nurtured the kingdom according to dharma.

Renounced from the cyclic existence and went to the peaceful forest.

Through the yogic practice, I subjugated the hordes of female.

Moreover, I wandered all the sacred places and cemeteries.

Received the knowledge from Indian scholars and practitioners,

I had received both the Buddhist and non-Buddhist teachings.

By the training of both scholaristic and siddhi,

I have refuted the non-Buddhist opponents and preserved the dharma.

At that time, by the power of prayer of King Trisong Dewu Tsen,

The King of black head of entire Tibet,

Invited me to Tibet, the land of snow, so I came here.

And tamed all the demigods and rakshasas and make them slaves.

Consecrated the evil land and temples.

Translated all the sutras and Tantras’ teaching.

For the sake of future generations, I hid lots of treasury teachings.

I had ripened and freed the fortunate beings, such as,

Hundred and eleven are the realm I tamed directly.

Now, I will depart to the Chamaradvipa.

I suggest you to pray, there is no gathering and separating with me.

Bear in mind that my compassion will protect you. Said Guru Rinpoche.

In the mean time, all the retinues respectfully paid countless of homage and offered a gold cup filled with turquoise. And ask,

When Guru PedmaSambhawa does not reside here and has gone to Chamaradvipa, to what object should we, faithful Tibetans, pray. What should be the field that we accumulate merit? Therefore, please bless an object of pray for the sake of us and faithful followers of future Tibetan generation. This is our humble request.

Guru Pedma Sambhawa accepted the request. He then entered into mediation and did yogic gaze to the four directions.  The Dakhinis of cemeteries and the residents of sacred places brought the material of statue, such as soil, stone, cool sand, jewels, herbals, and quality wood of eight cemeteries, and handed over to the spiritual guidance. The spiritual guidance put his saliva together with the immortal nectar and formed concrete out of mixture of those materials’ fragments.  With that concrete, he made a sculpture which contains the pills of immortal nectar, made out of relics of seven Buddhas and Vidhyadharas, hair of Buddhas and Vidhyadharas, their clothes, seed syllable and root mantra as its input or dharani. He painted the statue with natural vermilion and blessed to be infinite. With the leftover concrete, he made the sculpture of Bhero Pedma Dudul. When Guru Rinpoche was consecrating the two sculptures, countless of bright lights radiated from the statues and got spread all over the land. Deities were gathered to worship the statues and leaders and civilians dwelled in the perfect absorption.

Then the spiritual guide said,

Listen! The faithful leaders and the civilians,

Lacks the object of pray and the prayer maker.

However, for the sake of faithful coming generation,

And had hidden many statues, scriptures and wealth,

In the treasure in Tibet.

As the leaders and the civilians gathered here had requested,

That can free all simply by seeing it.

They are not other than me.

It’s the only the wealth of people of degenerated time.

It is the best light to dispel the darkness,

It is the jewel ladder that leads to the Nirvana.

Therefore, if one aspires to it.

Or if one sees its face, worships it or prays to it,

Temporarily, all wish will be fulfilled.

Ultimately, one will travel to light of lotus.

That is why, for the coming generation,

Alas, the faithful student who has karmic link!

In the future, at the time of five degenerations,

People will have short life-span and scarce the wealth.

Living in dharma will be so rare.

Even a few happened to be existed, they won’t be dedicated.

Consequently, it will be difficult to gain the heat level practice appropriately.

For that reason, I created my mask-like statues,

If one sees, holds or prays to it,

One will be greatly benefited. In order to get the benefits,

The secret pith instruction of bindu of essence,

And the two sculptures that can free you simply by experiencing.

For the sake of coming generation,

I am hiding these in the tiger-like cave,

Near the secret cave of Yahma Lung.

When the degenerated time of thirty is close to be happened,

By forceful power of current prayer,

My son, who holds the name of Pedma,

That person will put this into practice. Said Guru Pedma Sambhawa.

All the leaders and the civilians humbly paid homage and put statues on their head. They made prayer for the sake the coming generations and hid them in profound treasure.